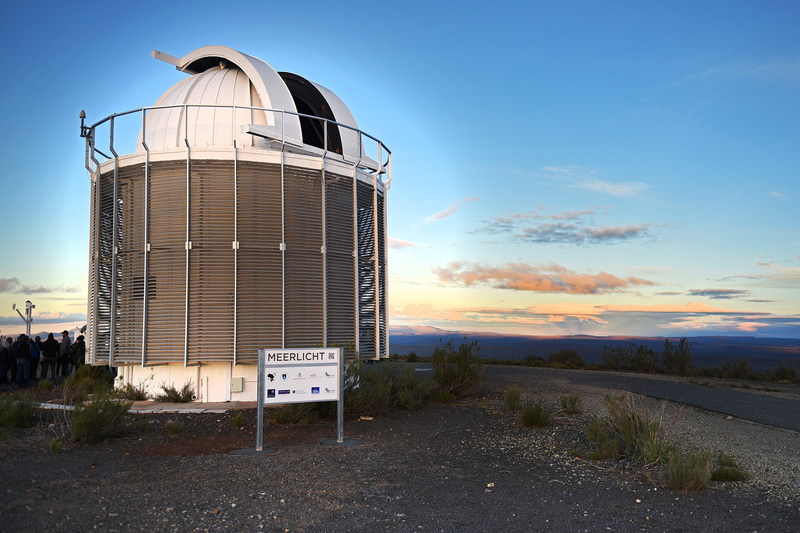 In this special mini-episode of The Cosmic Savannah podcast, we are joined by Timothy Roelf, a Master’s student at the University of Cape Town.

Primarily a data scientist, we chat with Tim about what why he decided to start a project related to astronomy. Tim is improving the way we monitor the telescopes that are monitoring the sky.

This project will be initially be applied to the MeerLICHT and BlackGEM telescopes, but might be also relevant to other telescopes in the future.

Featured Image:
The MeerLICHT telescope in Sutherland, South Africa, aiming to provide a real-time pairing of its optical view with the southern radio sky as seen by MeerKAT.
Credit: https://www.news.uct.ac.za/article/-2018-05-28-a-new-window-on-the-universe

This mini episode was produced and hosted by Sambatriniaina Rajohnson, a PhD student at the University of Cape Town.

Sambatra: [00:00:00] Hi everyone. Welcome to the new and special mini episode of The Cosmic Savannah. You may be wondering why is it a special episode? Well, The Cosmic Savannah podcast has got new volunteers to help them out this season. I am Sambatra Rajohnson, one of these new volunteers, and today I’m very excited to be able to introduce to you the guest.

Alright, so we will be joined by a data scientist with a passion for astronomy, Tim Roelf, a postgraduate student and my fellow colleague at the University of Cape Town here in South Africa. He will be sharing with us his perspective of astronomy as a data scientist. He will be talking about his project, which is to develop a tool to improve the performance of astronomical telescopes such as MeerLICHT and BlackGEM, understanding how it is behaving, why and when is it giving errors. So this is basically going to help us understand how data science is contributing to Astronomy, but before hearing from Tim, you might already ask yourself what are MeerLICHT and BlackGEM? And even when we will go through the interview, for those that are not familiar to Astronomy or data science like myself, there might be some words that we will not understand. Do not worry if you do not understand them all, I will try to explain them.

For example, MeerLICHT, the Dutch translation for “more light”, is an optical telescope located in Sutherland here in South Africa. And it will provide a real-time optical view of the radio sky as observed by MeerKAT, the new powerful radio telescope and SKA precursor already talked about in the previous episodes of the podcast.

So MeerLICHT serves as a prototype for the BlackGEM project. They will mainly study transients, which are astronomical phenomena with a duration of fractions of a second to weeks or years. During the interview, we will hear the word “operational logs” a lot. So it is a file that records every event or error that occurred during the telescope run. For example, how was the weather, how was the humidity?

There is also “metadata”, which is a data set that describes other data and the “header” which is detailed information contained in data or in an image obtained during the observation. It will contain its details like its coordinates in Right Ascension and Declination or RA and DEC. It is just a kind of similar coordinates to longitude and latitude, but it is used in space.

Alright. So now if you’re interested in what is happening behind the scenes that astronomers should go through before getting the beautiful images from the sky, let’s hear from Tim!

Thank you for being with us today and also joining as a volunteer for The Cosmic Savannah podcast. Can you please give us a short introduction to yourself?

Tim: [00:03:35] So I am currently a Master’s student at the Department of Astronomy. I am not actually an astronomer though, I am a data scientist, so there is a little bit of confusion there as to where I kind of belong. And It is quite interesting because my course is actually interdisciplinary between the stats department, computer science department and the Astronomy Department.

So last year I was actually registered with the stats department, but now this year, because I am doing my master’s dissertation, I am with the Astronomy Department. I have not been at UCT for that long though, I actually did my undergrad and my Honours at Stellenbosch so this is my second year at UCT and it is really, really fun.

Sambatra: [00:04:17] Oh, wow. You were mainly a data scientist, so what motivated you to move into Astronomy?

Tim: [00:04:24] Well, we were allowed to choose our dissertation topic with any of the affiliated departments, like with the Astronomy guys, with the computer science people or with the stats department. And I was really interested in, actually only two of those, so it was Computer Science and Astronomy. I did not really want to do a stats project as it did not fit my character and a lot of them only focused on biology or finance, which is not really my field.  What was really nice with Astronomy, or what I enjoyed in Computer Science was data visualization, but in Astronomy, they also give you an opportunity to do work on projects with data visualization as well, which is really nice.

So when I did my modules in Astronomy last year, I got a list of projects from the person who was giving the Astronomy course, which is Jordan Collier. And on it were several projects, I can’t remember all of them, but the most interesting I picked was with my current supervisor, Professor Paul Groot. And I picked it because it was the most interesting project there and I kind of just ran with it.

Tim: [00:05:53] The project that I am working with Paul on at the moment is with the MeerLICHT and BlackGEM telescope array setups. So they are optical telescopes with very similar designs and telescope control systems that are used to automate the operation of the telescopes.

What I am doing specifically is looking at the telescope log, or the operational logs and their headers that are attached to any pictures that are taken from observations. What I am trying to do is improve the performance of the telescope, but also categorise what is going on inside the telescope and how it is behaving in a way that is human friendly and readable. Because a lot of information on how the telescope is actually functioning goes into those logs, but they’re not human readable and they contain information about how the system components are working, how the weather is outside the dome and inside the dome, whether components are connecting together, wether observation that has been through has been processed properly, those kinds of things. So how the telescope is actually functioning, and a lot of that information is stored within these operational logs.

What has been found with the astronomers recently while they’ve been doing some observations is that, if they encounter an issue, what will happen is they have a web interface that they are busy working with and they’ll request a specific observation. They want to look at a specific field and you have the telescope which will start at its rest position and then move to whatever the RA and DEC is associated with that field. And for instance, if something went wrong, they would only get an error message out of that web interface.

Tim: [00:09:32] The error message will pop up while the system is going. So one of my tasks is actually to look at what messages are coming in the logs before that error and after it, so that I can hopefully predict where an error will come from a specific set of observations, essentially. So that will give the astronomer time to know that if I move it here after this specific observation, there will be an error.

Rather than they move it there, the error comes and then they see the error, they can’t do anything about it and the telescope moves to its next observation.

Sambatra: [00:10:19] Alright, so do you think you can use the same method for any telescope or is it only valable on MeerLICHT and BlackGEM?

Tim: [00:10:25] That is actually one of the requirements or what I am actually looking for as part of my project is to try and develop a framework for multiple telescopes, not just  MeerLICHT, but also BlackGEM and other telescopes. A framework that you can use to analyse the log data and categorise the error messages, and then hopefully predict certain outcomes during the observation.

I am trying to make it as general as possible. So I’m trying to make it a one size fit all, a situation where the framework that I have developed can be moved and used between telescopes as long as they have an appropriate logging system in place. So as long as the telescopes are generating logs, my framework will be able to work with their system.

Tim: [00:11:28] So I guess my project is not very flashy, like the Astronomy projects, because everybody is interested in people taking really nice observations, getting really good pictures of the sky. But for me, this is more being able to ensure that those observations work, and work consistently and that we are actually able to get to a point where we are able to schedule observations autonomously, which they do now. And if they run into an error or if there is a predicted error, they will have a solution for it. That way you will be able to limit the amount of time a physical astronomer has to be there to correct error messages, essentially that come up. Because if we are able to predict them beforehand, the telescope system can then take that into account and then adjust itself accordingly.

And that is very useful because it means that astronomers can then spend time doing other things that they prefer to do. So actually doing the science and understanding their observed galaxies, stars, phenomenal transient, so MeerLICHT is working on transients, rather than sorting out errors that come from observations.

But it is also a very general idea in the sense that I’m just using metadata. So information about a system to correct a system. So in that broad sense, it is a very applicable idea.

Tim: [00:13:11] Yes, that sounds really fun. To be honest, given the current situation, I actually asked Patrick if I could have gone with the third years and helped with some observations in Sutherland.

And I was super keen for that and then pouf! Yeah.

Sambatra: [00:13:29] Okay. I think that is all for today and thank you very much for the very interesting talk, Tim.

Sambatra: [00:13:58] Wow. That was a very, very fruitful interview, especially when we have learned how he arrived into Astronomy. Surely his project is a complex one, very challenging, but it will help astronomers to directly diagnose what’s wrong, what is happening during observations and especially when he said that the telescope will adjust by itself. So you do not need anymore spending time figuring out and fixing the errors, unless it is a very big one. You can wait for it and relax and have a cup of coffee while staring at the beautiful night sky.

At the end of the interview, we have heard some few names such as Patrick. Who is Professor Patrick Woudt, the Head of the Department at the University of Cape Town. He was already a guest during the 23rd episode of The Cosmic Savannah.

Every year, third year Astronomy students have a field trip to Sutherland to familiarize themselves with astronomical observations and hands-on experiences and Tim wanted to go with them. I hope he will go there soon.

Cool, alright. I think that is all for today’s mini episode. I hope you enjoyed it. See you next time in the new episodes and stay tuned!