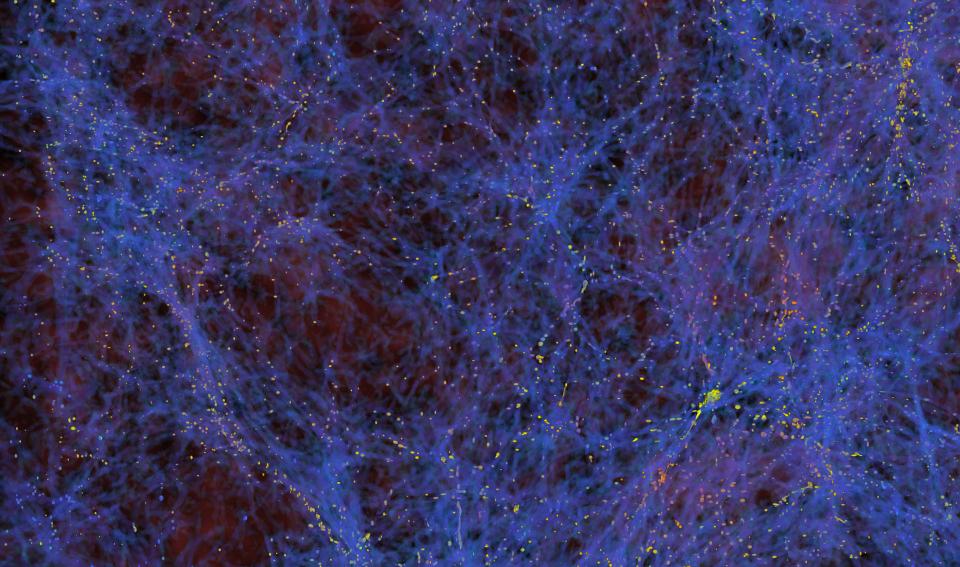 In this week’s mini-episode, we chat with Liantsoa Finaritra Randrianjanahary who is a PhD candidate at the University of the Western Cape (UWC).

Liantsoa works in the field of cosmology which means he is researching the whole universe as one entity rather than focusing on the individual contents of the universe such as stars and galaxies.

We discuss his specific interest in the evolution of the universe and how he can determine some of the hidden secrets of the universe. Liantsoa’s work also involves the use of hydrogen measurements and even the density of the mysterious quantity known as dark matter.

This is a particularly hot field of research to be in during the modern era of astronomy with massive datasets being produced by the Square Kilometer Array (SKA), MeerKAT, and the Hydrogen Intensity and Real-time Analysis eXperiment (HIRAX) radio telescopes.

This simulation of the underlying large-scale structure of the universe displays the dark matter web in blue and hotspots of galaxy formation in yellow. Image credit: Zarija Lukic/Lawrence Berkeley National Laboratory

This mini episode was produced and hosted by Robbie Lees, an MSc student at the University of Cape Town.

Robbie: [00:00:00] Good day and welcome to this mini episode of The Cosmic Savannah. My name is Robbie and I will be your host for this mini episode. Firstly, a little bit about myself. So I’m a Masters student at the University of Cape town studying stellar astrophysics with my focus being on ultra compact binary objects.

Now Liantsoa sort of studies cosmology, which basically means that he’s studying the universe as one whole entity and not just individual parts of the universe. His aim is to unlock the secrets, at least some of them, of the evolution of the entire universe. That’s a pretty daunting task if you ask me. As you can imagine, this is all rather complex and so I’m going to explain some of the jargon and the terms that he uses just before we get into the interview.

Firstly, he talks about a nonlinear correction to the neutral hydrogen power spectrum. Now that all sounds very daunting. However, all I want you to take away from that is that basically Liantsoa is using hydrogen as a way to measure different parts of the universe and therefore study the evolution as a whole of the universe.

And via the corrections that he makes to his detections, he can infer certain information about the universe. Another thing that he mentions is dark matter. Now, dark matter is something we hear about a lot in sci-fi, but it’s actually a real thing. And all we know about dark matter is we can observe what effect it has on things like rotational curves.

Unfortunately, we don’t actually know yet what it is, which is why it’s still known as dark matter. So dark matter has effect on something called rotational curves, which Liantsoa mentioned, but I thought I’d just touch on it here as well. Rotational curves of something like a galaxy is simply a measure of the velocity of what’s rotating around the center of a galaxy at different distances from that center. To put it simply, matter is moving a lot faster than you would expect at the ages of galaxy due to the the contribution of dark matter.

Now baryonic matter is another term that Liantsoa mentions, which is just simply visible matter. Matter that we know what it is like atoms, different particles. We know what those are, those are baryons. Finally Linatsoa would just like me to mention that he has a speech impediment. However, this does not prevent him from giving us a great explanation of his fantastic work. Let’s enjoy the interview.

Robbie: [00:02:48] With us today we have Liantsoa, a PhD student from UWC who is working on cosmology. Hi Linatsoa.

Liantsoa: [00:02:52] I’m working on a cosmology. So I do nonlinear correction to the neutral hydrogen power spectrum. And from that I can infer the cosmological parameters and study the dark matter and dark energy and can tell how the universe is expanding and how it’s evolved.

Robbie: [00:03:23] That sounds all really interesting. When you talk about these cosmological parameters, could you explain what some of those are?

Liantsoa: [00:03:31] When we talk about cosmological parameters first, we have to know that we are working on the standard model of cosmology and for us cosmological parameters are like the density of the baryon in the universe, the density of the dark matter, the Hubble parameters which tell you how fast is the universe expanding, and the spectral index, which tells you about the shape of your power spectrum, and the Sigma eight, which is a fluctuation of the masses in the universe.

Basically, those are the main cosmological parameters, but there are more, but I’m focusing on these several that I just mentioned.

Robbie: [00:04:37] So it sounds to me like you’re studying what the basic contents of the universe are like dark matter, for instance. Um, could you expand a little bit perhaps on what dark matter is and how we have come about detecting it?

Liantsoa: [00:04:50] Dark matter is missing mass that does not interact, which is not interacting electromagnetically with the EM window, but it does, uh, interact gravitationally. So we can see the effect of dark matter by looking at the rotational curve. [It is] about 25 percent of the missing mass in the universe.

Robbie: [00:05:29] That’s great. Thank you for expanding on that. Um, it sounds all very interesting. Just, could you tell me why you came into this sort of topic? What sort of made you find this as your project for your PhD?

Liantsoa: [00:05:43] Oh, with the upcoming data sets and technology with MeerKAT and SKA and HIRAX, we want to do better forecast with more precision of how our universe is evolving and how it’s expanding. So I want to, to answer that question. And, I’m also interested in neutral hydrogen cosmology, which is one of the hot, the hot subject in cosmology and with that I do an intensity mapping technique in order to probe more volume and to have a better understanding of our current universe.

Robbie: [00:06:49] That does sound like an incredibly interesting topic, but I’m afraid that’s all we have time for today. Thank you so much for joining us today Liantsoa.

Robbie: [00:07:06] That was Liantsoa talking to us about one of the most interesting fields I think there is at the moment: cosmology. I say that because I don’t think there’s a single field, which could be grander than the study of the entire universe, because that encompasses everything.

Some of the main points that Liantsoa brought up, were talking about cosmological parameters and how he can use those to infer certain things about how the universe evolves and expands.

He’s trying to study the basic contents of the universe as a way to unlock and uncover many of the hidden mysteries and secrets of the universe’s expansion and evolution. I myself, I’ve been to a few seminars and lectures on cosmology and it was quite astounding to me how much we actually don’t yet know about the universe, but how much we’ve been able to learn just in the last few years, just in recent times.

I think one of the most interesting points Liantsoa made there in that chat was how with the current and upcoming technology, there’s never been a better time, nor more interesting time to do cosmology. As with the vast amounts of data sets that new telescopes like MeerKAT and HIRAX are producing, we’re actually inundated with data, which can help us study the nature of the universe.

With people like Liantsoa working in this field, I’m sure we were able to uncover and learn lots more about the universe’s evolution, its expansion and its overall nature. Thank you again for a wonderful chat Liantsoa.

Thank you all for listening. And I hope that you have an absolutely fantastic day further.